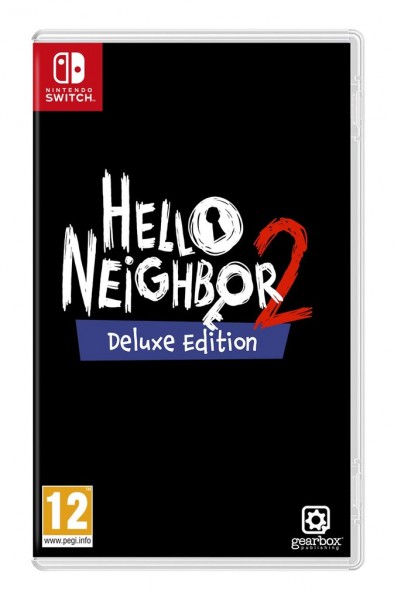 - Raven Brooks and all its mysteries are now yours to explore! Traverse the town, all of its houses and AI-driven inhabitants are now part of your playground.
- It feels like an investigative journalist simulator - sneak around and find out your neighbors' secrets.
- Can you outsmart the AIs? Every character in Hello Neighbor 2 is powered by a neural network AI, learning from the players, doing everything in their power to protect their gated community and its secrets.
- It's up to you to uncover the dark secrets hidden in Raven Brooks!
- Hello Neighbor 2 Deluxe Edition includes a voucher for the Deluxe Edition Content Pack which will include 3 DLCs, and a 5-day early access.

o Can't get enough of Hello Neighbor 2 and the very suspicious town of Raven Brooks? We've got you covered! Enrich your Hello Neighbor 2 experience with the Deluxe Edition Content Pack. Get the chance to meet more neighbors and discover their unique traits, explore new locations, and try out the advanced investigative tools available at your fingertips.

- Hello Neighbor 2 - Back to School DLC
- Long forgotten rumors of children going missing up at the abandoned schoolhouse have begun to resurface, but the only one still there is the cranky old caretaker and his mean watch dogs! He must be hiding something, and it's up to you to investigate. But be careful... breaking into the school won't be easy and the caretaker doesn't like trespassers!
- Hello Neighbor 2 - Late Fees DLC
- Have you heard the rumors about the Raven Brooks Library? They say the Librarian there won't let anyone into the restricted section. Could one of the books there hold the answers to any of the town's bizarre mysteries?
- Hello Neighbor 2 - Hello-copter DLC
- Explore Raven Brooks in a whole new way - from the sky! Take flight with the Hello-copter, a remote-controlled flying drone equipped with a camera and grappling hook, discover new solutions to old puzzles and experience previously unreachable heights!